I was planning to write next about another burial practice from the old norse days, but my employers started getting worried since i was spending all my time looking up information about how to bury dead people in extreme ways at work and urged me to sorta stop it as they were slowely backing out of the office.

So instead of burials and all that boring stuff, i'll write about a norwegian guy, and as we all know, norwegians guys were fucking hardcore before all that oil and welfare state business ruined everything manly about Norway.

The man i am thinking of is none other than Fridtjof Nansen, a Norwegian explorer, scientist, diplomat, humanitarian, Nobel laureate and certified badass of highest degree.

First off, let's just get done with the boring but normal life part: He was born someplace outside Christiania (which later became Oslo) in 1861. Then he turned 4 and decided he had enough of playing around. That sums about everything "normal" about him in his life.

During his days as a young school student, he developed healthy hobbies such as survival trips for weeks at a time during extreme conditions alone in the wilderness, living like "Robinson Crusoe". Because that's what children do, besting the forces of nature's freezing rage with a knife and nothing else, right?

However, it wasn't before he reached the age of 18 he got serious, at an age when most of us we are busy with rebelling and/or heartbroken.

What did he do? Join some political rallies? Started riding a motorbike?  Nah, he was busy beating the world record in skating. And just because winning once wasn't his sorta thing, he beat the record 11 more times on subsequent occasions simply because he could.

When he was 21, he decided that university, where he was studying zoology, kinda sucked, and went out on a expedition to greenland, which at the time was unexplored, and not suprising, the same cold shithole of a wasteland it is today.


The ship got caught and stuck in the ice. Most men just looked forward for the summer heat to melt the ice. Nansen wanted to go ashore but wasn't allowed because it would make the rest of the crew feel like the pussies they were. But while waiting he started theorizing that Greenland icecap might be explored, or even crossed! Oh joy!

Since Nansen had just developed interest in other fields too such as ecology and oceanography, would spend most of his time on deck studying polar bears before challenging them to a fist fight to death, studying ocean currents and other stuff sciency stuff. He also wrote a book about everything he observed while the rest of the guys huddled down below deck crying themselves to sleep.. Oh, He was a natural marksman, boasting a kill score of 200 flying, firebreathing mutant seals, because one asshole seal had flipped the finger to him.

He then returned home, chilling and just becomming the co-founder of the modern theory of the nervous system, earning his Ph.D. No biggie.
So yeah, not only could he destroy a mountain by headbutting it, he could also destroy it with the sheer power of his mind. He was basically a crossover superman and einstein on steroids. And that would be the end of this awesome man and his tale. However, all that was just some foreplay in his life.

He just couldn't stop his wet dreams about Greenland. And not being a man to give up his dreams, he decided that he wanted to go out for a leasurely stroll across greenland with a small party of six men total (expert skieers and Sami people) and some basic supplies. Refusing the more complex and manpower heavy system that was usually used. And he also designed much of their equipment like sleeping bags and stoves from scatch because when you have reached this level of insane, you might as well go all out.

The press started to mock him, saying his plans would most probably mean the death of them all. And we must not forget, pastey whimpy jounalists are highly knowledgable on hardcore survival and thus qualified to make such judgment.


Also, do note that at this time, pulling of this expedition would be the closest thing anyone had ever been to north pole. In 1888 they landed on Greenland by using small rowboats while Jason, the ship taking them there left them behind. Nansen felt that being stranded on Greenland alone wasn't badass enough, so he decided to burn the rowboats, just to be sure nobody would look back. also knowing it would make a great backdrop for any future movies about him, walking into the wastelands with an inferno and possibly huge explotions behind him. This was a one way trip, win or die painfully and miserable in the wastes of Greenland. 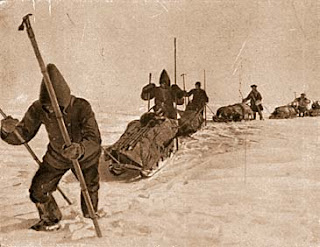 They were the first ones to cross one of the harshest enviroments in the world during two months, crossing crevasses, enduring ridiculous low tempratures, storms, loose ice and so on. Before finally reaching the west coast, but seeing the winter had arrived, thus barring any ships from getting them. They just decided to relax, build some small stone huts and chilled for 7 months hunting and studying wildlife before finally being able to return home to Norway as national heroes and giving the journalists a huge middle finger up their face.

He could die now, knowing he had set his name in history as a awesome badass of highest tier and be proud of his archievments like most would be at this. Not to mention a steady income from a job with no duties (curator at a university who just wanted to be associated with his name)

But Fridtjof Nansen isn't what most would be, and after a short break in Norway, getting married and deciding that North pole was next on the list of "attempted suicide" by using a method nobody had tried but everybody would copy later (once again being the first at something). Which was letting their ship freeze in the ice and naturally drift to the pole. Why, that does seem like a sound plan!


Mother nature in her attempt to piss of Nansen, decided to be a bitch and not help out. Nansen, who realized his dreams of landing on north pole came to a halt as the ship drifted too far away. Nansen saw himself beat and whent home in shame.

Nah, just kidding. He and another guy (probably an avatar of Nansens moustache) took a rowboat and rowed to some ice, and then crossed loose, open and highly dangerous ice terrain with dogsleds for an insane 25 kilometers before reaching the "polar" area itself.

Sadly, they didn't make it to the north pole, being just a few hundred km's away. The reason was that summer was approaching, and made things warmer and thus easier, something that made Nansen extremly pissed now that being on the north pole just wasn't brutally hardcore enough anymore. Oh, and ice started to break apart and some other trivial things. Probably from the sheer weight of his balls.

So he and his buddy was forced to retreat, however, having no faith in finding the drifting ship they left behind, they instead did opted to do something more insane. They made some makeshift kayaks and tried to sail for land which turned out to be a group of isles. After being forced to stop to fix their kayaks after a giant douchbag of a walrus attacked them, probably because Nansen had slept with his wife, daugher and sisters (no record of what happened to the walrus, but we can assume he was blown to bits by Nansens willpower), something really odd happened. There, in middle of the vast nowhere, Nansen and Johansen bumped into no other guy than Frederick Jackson, a fellow british explorer exploring the isles. Brofist occured. (pictured), and the two joined the brits and returned home, again as heroes.

Nansen custom designed ship, Fram, was later recovered and would be later used by another bad motherfucker by the name Roald Amundsen. Whom you might know of, as he was the first guy to successfully pull an expedition to the south pole.


This makes the all wooden ship, buildt in 1890 by Nansens sheer mindpower the only ship to both reach both furthest North and furthest South latitudes. A wooden ship, from 1890.

After grinding out six more volumes of scientific research (which he himself illustrated with beautiful drawings as seen on the left. God damn this man had many talents) and generally taking life on the easy side. World War 1 happened.

Nansen saw a chance at redemption and forgiveness for all the innocent blood from seals he had killed with his bare hands.

So he decided that wars killing innocent people like refugees was pretty shitty and totally not okay in Nansens book, not to mention war disrupted his research, which he started to focus much more on in his later life. And let's just say you don't stop Nansen at his research.

In fact, he found this so annoying, he went out and won Nobel peace price (back when it actually meant something) for his extensive work in helping refugees and other people harmed by war. He also became Norway's reppin' man at the League of nations and later United Nations.

The system he made for helping refugees, developing places hit hard by war, and the "Nansen Passport" is still used by the UN to this very day, albeit probably more abused and generously handed out.

After the war, he continued his good work, helping for example Greeks, Turks and Armenians escape persecution from different groups for different reasons, as well as internationally rallying food and medicine to Soviet Union's suffering population, and note that the Soviets trusted as always nobody and wouldn't deal with anybody.

Anybody but Nansen himself that is. Probably because Nansen threatened to crush the soviets if he wasn't allowed to help. He's credited with saving millions of russians with his system.

God started to realize that next to Nansen, God himself started to look pretty boring and totally a pussy, so God finally killed Nansen in 1930 (aged 68) in what we can imagine must have been the most epic hand to hand fight in mankind, even though God had poisoned Nansen's tea a bit earlier. And Nansen had both hands tied behind his back to even the score. 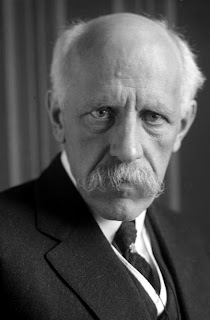 Picture of him right before he died. As one can see, even as an old man could he impregnate women by looking at them.